If you’re looking to cool a large space or one with high ceilings, then you need a powerful fan that can provide extremely powerful airflow.

The good news is that when you’re shopping for the best ceiling fans for large rooms, you will be spoilt for choice, given the myriad options available.

But we’ve checked out several large space ceiling fan options and narrowed it down to 7 models that will keep your space cool for many years to come. 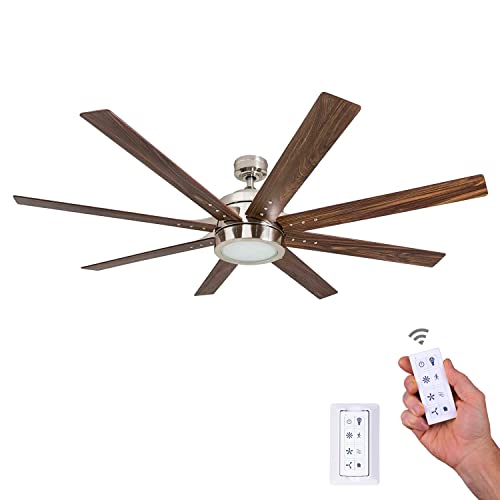 The Honeywell Xerces ceiling fan can be ordered in a choice of four exciting colors including brushed nickel, making it easy to get the fit for your space. Further, it boasts a bold body design complete with dual finish blades, and is powered by a robust 3 speed reversible motor.

The reverse airflow feature allows you to change the direction of air with the flick of a button. Speaking of which, the Xerces ceiling fan comes with a handy remote control that provides you with access to several functions of the ceiling fan from across the room including the 3 speed settings and light kit.

The integrated LED light kit of the Xerces ceiling fan is dimmable, and illuminates a max of 14000 of sheer brightness in your space. The Honeywell Xerces ceiling fan on a 4″ downrod or on angled ceilings (bracket sold separately).

When installed at the standard height, the Xerces ceiling fan measures 14.33″ from the ceiling to the bottom of the light fixture, with a blade span of 62″. The Honeywell Xerces ceiling fan is backed by a lifetime warranty against any manufacturer defects. 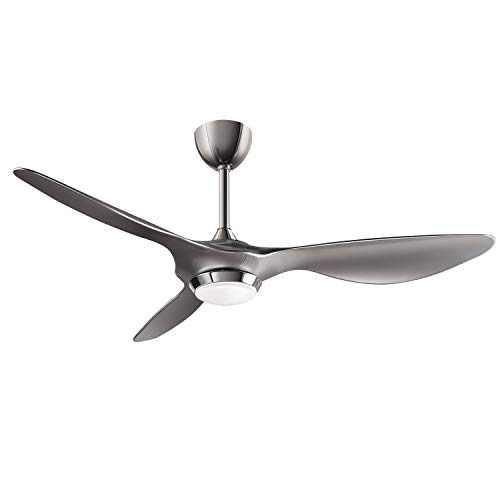 The Reiga ceiling fan can be ordered in a choice of six colors including a beautiful black and gold dual tone finish. This ceiling fan by Reiga is fitted with a silent, steel reversible dc motor that doesn’t do anything more than whisper during operation.

It is easy to install, measures 52″ in diameter, and comes with 6″ and 10″ downrods. The Reiga ceiling fan is suited for spaces that measure between 100 square feet to 250 square feet, and comes with a light fixture that can be adjusted between three different color temperatures from warm white to full light.

In the box you also get a high quality remote control, from where you can switch the direction of the fan, adjust the lighting, set the auto-off timer, etc. 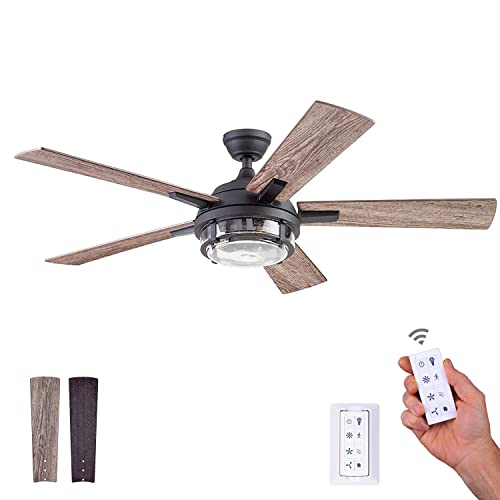 The Prominence Home ceiling fan arrives with massive 52″ blades, and is available in three colors including textured black, making it a great fit for several different spaces including dining and living rooms.

One of the noteworthy features of the Prominence Home Freyr ceiling fan is its intricately designed lantern that can be dimmed to suit your mood. It comes with E26/B11 bulbs that render 500 lumens brightness.

The Freyr ceiling fan by Prominence Home is ETL rated, meaning you can use it indoors, as well as outdoors including garages, patios or any other covered outdoor areas.

It comes with a remote control to use many of the fan’s functions wirelessly such as switching between the three speeds, and adjusting the light. The Prominence Home Freyr ceiling fan can be installed on a standard 4″ downrod (included) or on angled ceilings with an angled bracket (sold separately). 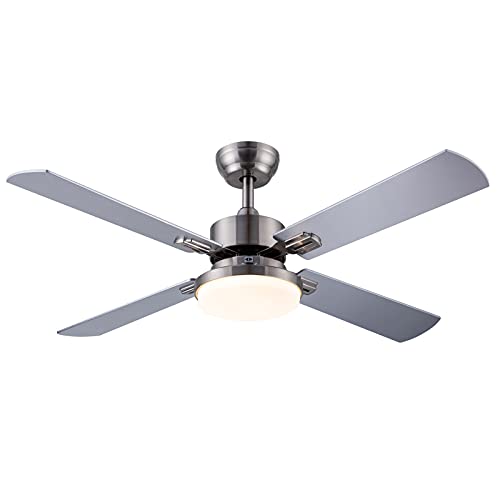 The SNJ ceiling fan is available in two different sizes including a variant with five blades, and features two sided dual-tone colored blades to better match your home décor. Under its hood lies a powerful 3 speed reversible motor, which can adjusted to maintain downdraft in the summer and updraft during the winter.

It comes with an LED light fixture that is covered with opal glass for even light distribution. The SNJ large space ceiling fan features an onsite timer that turns it off automatically at preset intervals, making it more energy efficient to use.

This ceiling fan by SNJ comes with a remote, from where you can control the fan speed, turns the lights on and off, and set the fan timer. 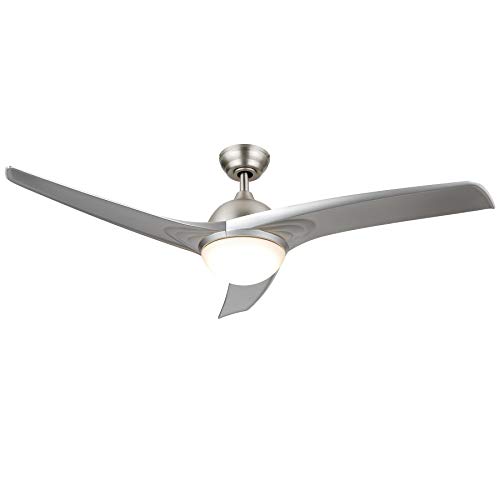 It is equipped with a silicon steel AC motor, which delivers great air movement, and quite operation. This motor is reversible, so you can change the direction of the airflow via a switch tucked away under the motor housing.

The CO-Z ceiling fan comes with a white glass shade that is fitted with a 15 watt adjustable LED, and a remote to adjust the fan speeds between high, middle and low, and change its direction of the draft. This fan for high ceilings is easy to install with the included 03/4” x 4.5”downrod, and 5.9” x 2.1” steel canopy. 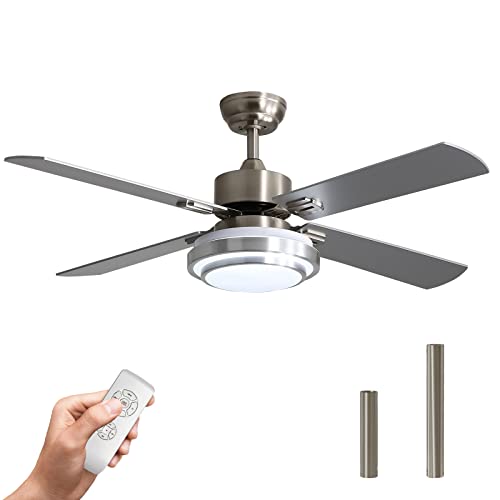 The Warmiplanet is one of the best ceiling fans you can buy for low ceilings for several great reasons, starting with its highly affordable price tag. Even at its low price, this ceiling fan for high ceilings and large areas comes with a silent reversible motor that provides powerful airflow in both directions.

This stylish and smart home fan comes with four large 52″ blades that collectively provide excellent air distribution in your room. Furthermore, the package contains two downrods including 8″, making it easy to install according to your needs.

The color temperature of the Warmiplanet large ceiling fan light can be adjusted between cool white, warm white and natural light. Further, its integrated timer shuts this high quality fan off automatically after a certain period of time.

All these functions can be controlled with the included remote controller, so there’s no need to reach for the wall control. The Warmiplanet ceiling can be ordered with an optional 24-watt tri-color light that can be used in a variety of different environments. 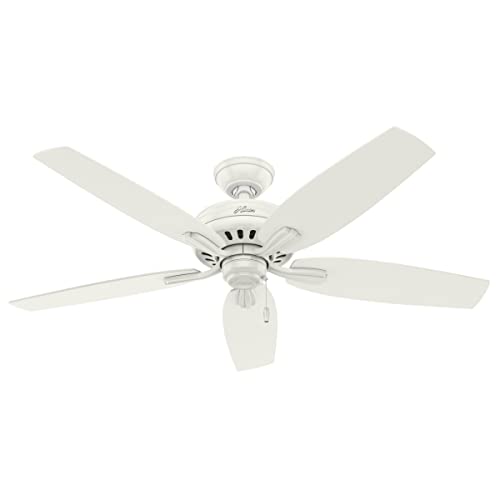 The Hunter Fan Company is a leading manufacturer of a wide range of fans, and the Newsome pull chain ceiling fan is yet another hit addition to the company’s vast portfolio of products. It is billed as one of the best ceiling fans in the market, most notably due to its award worthy performance, thanks its onboard whisper wind reversible motor.

It is available in three great colors including unique premier bronze, and measures 52″ x 52″ x 13″ overall. The Hunter Newsome is one of the few ceiling fans that offers pull operation, and can’t be controlled wirelessly, but on a brighter note delivers ultra-powerful airflow in any room where it’s mounted.

The Newsome fan by Hunter comes with both 2″ and 3″ downrods, and is damp-rated for use in covered areas such as sunrooms, patios and porches.

What is the Best Ceiling Fan for a Large Living Room?

The best ceilings fans for large living rooms should provide good air distribution, and be highly appealing in design. The Big Ass Fans Haiku L is a great example of an excellent large living room ceiling fan model, because it is available in a choice of five great colors including a dual tone caramel/black.

It can be paired with your Alexa device or Google assistant for voice control, and is a perfect fit for large spaces that measure up to 225 square feet. The Big Ass Fans Haiku L ceiling fans for high ceilings features an integrated WiFi module that allows you to customize the fan’s settings using voice commands.

The Big Ass Fans Haiku L fan comes with a slimline IR remote that can also be mounted in the wall to adjust several settings such as fan speed, and automatic timer. This ceiling fan for large living rooms makes little or noise at 35 dBA, and is factory balanced to prevent wobbling or squeaking. To top things off, it is energy efficient, and can save you approximately 30 percent on cooling costs.

Which is the Best Great Room Ceiling Fan?

The best great home ceiling fans feature special characteristics such as a contemporary design, dimmable light, dc reversible motor, preferably an oil rubbed bronze finish. In this regard, the Minka-Aire ceiling fan checks all the boxes, and apart from oil rubbed bronze is also available in silver and tie die color options.

It features a 15-watt dimmable light module, measures 16″ from the ceiling to the lowest tip of the fan, and comes with a 6″ downrod. The Minka Aire ceiling fan with remote can be paired with Alexa and Google Assistant via the optional Bond hub BD-1000 (sold separately).

One of the best info large outdoor ceiling fans that you can use indoors too is the Monte Carlo Grand Maverick, because it is available from sizes starting from 52″ to 99″. The largest size of this ceiling fan measures 99″ in diameter, and 13.9″ in height from the ceiling to the bottom of the fan housing.

But that’s not all, it is also damp rated, so you can use it in indoor or outdoor areas that measure up to an expansive 400 square feet. The package also includes a handheld remote that allows you to switch between 6 fan speeds, change the direction of the fan, and much more. I’m David, a HVAC enthusiast and the founder of this website.

My mission is to provide you with easy to understand HVAC knowledge in order for you to make the right HVAC choice for your home and your family.

It's always wise to get a number of estimates for your HVAC project.

Simply click the button below, fill out the quick form, and the quotes will land in your inbox with hours.

Get My Free Estimates